The Farseer Trilogy by Robin Hobb 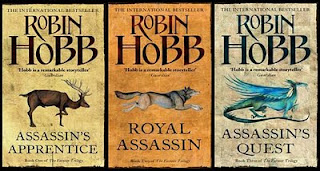 
Blurb from Amazon (Assassin's Aprentice): Young Fitz is the bastard son of the noble Prince Chivalry, raised in the shadow of the royal court by his father's gruff stableman. He is treated like an outcast by all the royalty except the devious King Shrewd, who has him sectetly tutored in the arts of the assassin. For in Fitz's blood runs the magic Skill--and the darker knowledge of a child raised with the stable hounds and rejected by his family. As barbarous raiders ravage the coasts, Fitz is growing to manhood. Soon he will face his first dangerous, soul-shattering mission. And though some regard him as a threat to the throne, he may just be the key to the survival of the kingdom.


The Farseer Trilogy wasn't what I expected, and that's absolutely wonderful, because I expected something cliche.

The Farseer Trilogy stars Fitzchivalry, who at first seems to be a cardboard cutout of so many of the "poor farmer boys" from epic fantasy. But the drama, action and pain that he experiences through these three books is anything but typical. The Farseer Trilogy is the story of the red ship raiders that ravage Buck's coastline, using dark magic to turn those that survive their pillaging into little more than animals, little more than zombies.

It's also the story of Fitz's journey as a bastard child of the former King-in-Waiting, Chivalry, and the young boy's training as an assassin for the current monarch, King Shrewd.

It's also a love story with an ending that is satisfying but depressing.

It's also got dragons.

These books were full of action, drama, and lots of painful scenes. Robin Hobb really knows how to give her characters hell, and it shows. Fitz is often very close to losing his life at any given moment, and has the kind of frequent brushes with death that reminded me of Harry Dresden in Changes. A lot of very bad stuff happens to Fitz, and you're there for every agonizing moment.

This series is much closer to George R.R. Martin's A Song of Ice and Fire than I thought before reading it. What I mean by that is that bad things happen to good people, good people die, and sometimes the bad guy wins. That's not to say that they're horribly depressing, or so emotional that you won't be able to read them. Quite the opposite. You'll find yourself turning pages like a madman, because you're rooting for that idiot Fitz to figure out the plot and save the day, or himself.

That reminds me that I need to mention my least favorite part of these books. Fitz is sometimes (okay, a lot of the time) a moron. Maybe I'm not a teenager, and for a good part of the series Fitz is, but some of the mistakes he made seemed pretty obvious to me, right up to the end of the novel. The information that people often tried to give him seemed easy for me to understand as well, but he just didn't get it.

Despite Fitz sometimes being dumb as a box of rocks, the story is excellent, the descriptions beautiful, and the pacing of the plot wonderful. There were parts of the first book that slowed down a little too much for me, but once the tension ramped up starting at the end of book 1, even the slow scenes had that unmistakable sense of looming dread that keeps you reading and turning pages.


The Farseer Trilogy gets a 9/10. Even with the glut of great fantasy, old and new, this deserves to be a series that everyone that wants to be familiar with the best the genre offers should read.
Posted by Bryce at 1:27 PM